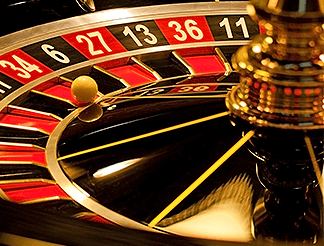 It's A Golden Oldie

Roulette is the third most popular casino game, beaten only by slots and craps, so if this is your favourite game, you are in plentiful company! Developed in the sixteenth century by French mathematician, Blaise Pascal, the roulette wheel was actually designed in an attempt to create a machine with perpetual momentum, but Pascal later decided to use his wheel as the basis for an exciting game of chance, possibly inspired by the banned English game, Roly Poly. The roulette wheel was first recorded as having been used in a casino in a novel written in 1796.

All the numbers on a roulette wheel, one to thirty-six, add up to 666, a number commonly associated with the Devil. Being a game of chance as opposed to strategy, this can seem like an apt analysis, particularly during an unlucky streak, however although it may not be coincidence, it is more likely that inventor Pascal was harnessing the mathematical significances of the number, rather than its religious connotations.

Why Zero and Double-Zero?

It was the original roulette wheels that bore both a zero and a double-zero, and having been devised by a mathematician, the aim of the design was to be as mathematically fair as possible. It was only in the nineteenth century that tables were introduced with only a single zero by brothers Fran?ois and Louis Blanc, whose aim was to entice customers to their casinos because the single zero games offered better player odds. Their ploy was successful, and they became the forefathers of Monte Carlo’s casino heritage.

Today, the traditional double-zero tables are known as ‘American’ and the single zero games known as ‘European’ or ‘French’. However, early American tables were in fact not true to tradition, with numbers only going up to twenty-eight instead of thirty-six, and there was an additional ‘American Eagle Slot’ that was bigger than the other pockets on the wheel, giving the house additional edge and proving unpopular with punters. Now there are fewer than six of these tables known to exist, making them extremely valuable.

Did you know that ‘The Man Who Broke the Bank at Monte Carlo’ was a bona fide person? Composed in 1892 by Fred Gilbert, it is likely that gambler and con-man, Charles Deville Wells, was the inspiration for the song, although other possible models include Joseph Hobson Jagger, who is said to have hired men to record the outcomes on all tables at a Monte Carlo casino to determine if any had mechanical failings that produced biases towards particular numbers, and Kenneth MacKenzie Clark (senior).

With such high odds on a straight-up or single number win, high stakes equal high rewards, and other famous big spenders include Brits Philip Green, who cleaned up £2m at a London casino in 2005 and Ashley Revell, who sold all his worldly possessions to place a total of US$135,300 (£76,840) on red at a Las Vegas casino, doubling his money in one spin in 2004.

The Martingale system is one of the oldest and most famous, having been in existence since the eighteenth century. This strategy requires the roulette-player to double their bet every time they lose, but it is notoriously an easy way to lose vast sums of money. The system is reputed to have originated via English casino-owner, Henry Martingale, as a catchphrase to encourage losing gamblers to ‘double ‘em up’.

Physicist, J. Doyne Farmer, extensively studied the bounce of the roulette ball in the 1970s and used his findings to successfully predict the outcome of a spin at a Las Vegas table. Since then, researchers such as Michael Small and Michael Tse have devised similar statistical models based on the rate of rotations of the ball that boost player odds by eighteen per cent, however, the difficulties of counting the rotations and retrieving the required information from the equations before the ball drops and within a highly scrutinised casino render this method almost unfeasible.

In roulette, the dolly is the marker used to highlight the winning number, and it stays on the table until losing chips have been cleared and all winning bets have been paid out. During this time no players must place bets or otherwise interfere with the table. Most people may only know the word ‘dolly’ as an informal name for a child’s doll, or as a diminutive form of the name Dorothy, from which the child’s toy is actually derived. But in terms of roulette, ‘dolly’ originates from an engineering definition of the word that refers to a block, often wooden, placed on top of a pile that is being driven, so as to protect the pile from the shock of the impacts.

This site is a free online resource that strives to offer helpful content and comparison features to its visitors. Please be advised that the operator of this site accepts advertising compensation from companies that appear on the site, and such compensation impacts the location and order in which the companies (and/or their products) are presented, and in some cases may also impact the rating that is assigned to them. To the extent that ratings appear on this site, such rating is determined by our subjective opinion and based on a methodology that aggregates our analysis of brand market share and reputation, each brand's conversion rates, compensation paid to us and general consumer interest. Company listings on this page DO NOT imply endorsement. We do not feature all providers on the market. Except as expressly set forth in our Terms of Use, all representations and warranties regarding the information presented on this page are disclaimed. The information, including pricing, which appears on this site is subject to change at any time.




Copyright © 2009-2018 Natural Intelligence Ltd. All Rights Reserved.
By using our content, products & services you agree to our Terms of Service and Privacy Policy
Reproduction in whole or in part is strictly prohibited.
Players must be 18 or over and located in the United Kingdom. This website contains information about a range of products and services.
Certain details, including prices and special offers, are provided to us directly from our partners. These are subject to change at any time without prior notice. The information we share does not constitute legal or professional advice or forecast, and should not be treated as such.
Got It

Cookies help us deliver our services. By using our sites or services, you agree to our use of cookies. Learn more.